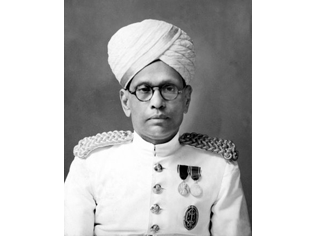 Sir M. Venkatasubba Rao, the Founder President of our parent organisation Madras Seva Sadan, was born on 18-7-1878, educated in the Madras Christian College and having enrolled as a Vakil (there were no advocates in those days) in July 1903, practised along with his friend from College days, Mr. V Radhakrishnaya for over 17 years. Mr. M. Venkatasubba Rao practised on the original side and soon became one of the leaders of the bar.

and passion for Justice. The law reports bear ample testimony not only to his command of English and his legal learning, but also to his anxiety to get over technical impediments, to a just and equitable decision.

In 1935 he was appointed as member of the Delimitation Committee which toured the whole Country.

He retired as Chief Justice of the Madras High Court in 1939.

Later in 1939, he was made the Agent for Berar of the Nizam of Hyderabad.

His zeal for Social reform and Social Justice personified itself in the starting of The Madras Seva Sadan along with his wife Lady Andal M. Venkatasubba Rao (Padma Bhushan) who was one of the pioneer Women Social Workers in India, in the cause of unfortunate women and girls. This multi-purpose welfare institution for women and girls which was started in 1928 by Sir M. Venkatasubba Rao and Lady Venkatasubba Rao with 8 destitute women and children, today caters to more than 10,000 women and children, in various welfare activities in and around the city of Madras.It was to commemorate the name of the Founder that the Madras Seva Sadan started Sir M. Venkatasubba Rao Boys School in their own premises at 57B, Thirumalai Pillai Road, T. Nagar, Chennai. The Management will endeavour to run the school in accordance with the high ideals set out by the late Founders.